The Appletini first made an appearance in 1996 in a Hollywood bar called Lola’s, originally called an Adam's Apple Martini as the bartender that designed it was called Adam. Not strictly in the recipe or traditional, we like to add a dessert spoon of dry white vermouth which we really think adds depth to the flavour of this already tasty and trendy cocktail. 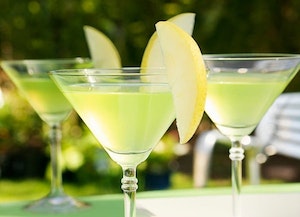