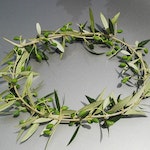 The olive wreath was the prize for the winner at the Ancient Olympic Games. It was an olive branch, off the wild-olive tree that grew at Olympia, intertwined to form a circle or a horse-shoe. According to Pausanias, it was introduced by Heracles as a prize for the winner of the running race to honour Zeus. When the modern Olympic Games began in 1896 medals started to be given to successful Olympian competitors. However, gold medals were not awarded at the inaugural Olympics in 1896 in Athens, Greece. The winners were instead given a silver medal and an olive branch, while runners-up received a laurel branch and a copper or bronze medal. In 1900, most winners received cups or trophies instead of medals.

The custom of the sequence of gold, silver, and bronze for the first three places dates from the 1904 Summer Olympics in St. Louis, Missouri in the United States. The International Olympic Committee (IOC) has retroactively assigned gold, silver and bronze medals to the three best-placed athletes in each event of the 1896 and 1900 Games. If there is a tie for any of the top three places all competitors are entitled to receive the appropriate medal according to IOC rules. Some combat sports (such as boxing, judo, taekwondo and wrestling) award two bronze medals per competition, resulting in, overall, more bronze medals being awarded than the other colours.

Medals are not the only awards given to competitors; every athlete placed first to eighth receives an Olympic diploma. Also, at the main host stadium, the names of all medal winners are written onto a wall. Finally,  all athletes receive a participation medal and diploma. 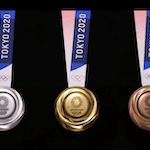