Things We Eat At Easter And Why We Eat Them

Easter food traditions, from giving Easter eggs to eating hot cross buns, have been a part of our Easter celebrations for years.

Have you ever wondered why Easter lunch comprises of mum’s roast lamb and lots of juicy carrots? Or why the marzipan-covered Simnel cake is popular at this time of year? Or what the cross on the top of a hot cross bun is for?

Many Easter food traditions go back hundreds, if not thousands, of years. And while it may seem obvious why we eat some foods, like lamb being a popular seasonal dish in the spring, many of the things we enjoy at this time of year have deeper meaning behind their origins too.

The majority of the Easter food traditions we know and love now have religious origins. Though some foods have developed their own significance as Easter symbols in modern times too.

Celebrating Easter is most commonly associated with the Christian faith. However, some Easter traditions are also pre-date back to Pagan rituals too. These rituals celebrated the arrival of Spring and the equinox which occurs around the same time. 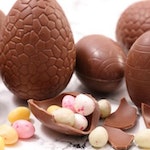 Chocolate Easter eggs are now one of the most common symbols of Easter. First created in the 19th century, the real developments in the creation of chocolate eggs came with the experiments made by the Cadbury Brothers in the 1870s.

Picking up on the tradition for decorating real eggs at Easter, the brothers (and other leading chocolatiers of the time) worked with chocolate to make it easier to melt and shape. The first decorated Easter eggs were covered with marzipan flowers and filled with sugared almonds. 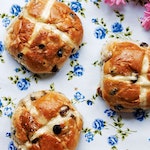 The cross on top of these fruit buns is a symbol of the crucifixion - which is why they are traditionally eaten on Good Friday. In Tudor times it's thought that fruit buns were limited to treats for special occasions - such as Easter - which is why this has become a common base for the cross, which is made with a simple flour and water mixture.

Hot cross buns that are cooked on Good Friday are said to never go mouldy throughout the year and if you split one with a friend and say 'Half for you and half for me, Between us two shall goodwill be' - the friendship will strengthen in the coming years. 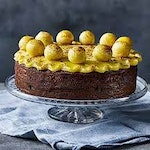 There is some debate about the origins of the Simnel cake. The traditional cake is made with a layer of marzipan in the middle and on top and has 11 marzipan balls to represent the apostles - with Judas left out because of his betrayal. It is not clear where the word Simnel originates, but this cake is a Lent-time favourite that can also be given as a treat for Mother's Day - which usually falls in the Lent period. 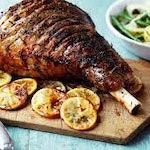 Often served on Easter Sunday, Lamb is referenced in quite a few Christian stories and has become linked with Easter due to the reference of Jesus being the sacrificial Lamb of God. This tasty meat is also associated with spring-time thanks to lots of lambs being born in the spring. 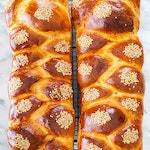 Bread has a very strong link to Christian religious ceremonies as it is said to represent the body of Christ and was served at The Last Supper. It is tradition to adapt bread recipes to suit each religious celebration and Easter bread (alongside hot cross buns) is commonly made during the Easter weekend - you will often see eggs or other festive decorations placed atop the bread to give it a twist. 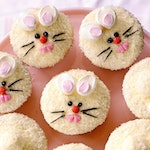 We all know rabbits don't lay eggs - so where did the tradition of the Easter bunny come from? The origins of the rabbit and its association with fertility can be traced back to Pagan rituals. Over the years the legend has developed to be associated with Easter and then with the hiding of Easter eggs. Easter nests were first created for the rabbits to lay their eggs. 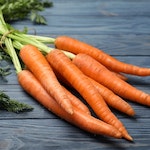 This one is quite obvious when you think of the Easter bunny, but carrots are also very closely associated with the Easter period. From leaving out carrots for the Easter bunny to baking cakes with carrots on top, they're also a great seasonal side for your roast lamb. 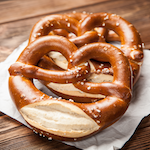 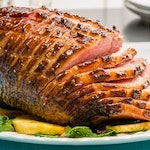 Ham is another Easter tradition that hails back to the pre-Christian Pagan era, where it was seen to bring luck and good fortune. In the past, ham was an easier meat to get in poorer parts and at the early time of the year, it is also a popular Easter meal in America where lamb isn't a commonly-eaten meat. 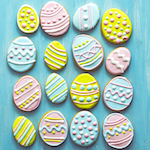 Special Easter biscuits are another Easter food tradition, particularly in the South-West of England. Slightly-spiced, sultana currant biscuits are made in the West Country to celebrate the festivities. Original recipes included Cassia oil in the belief that it was used to clean Jesus's body after his crucifixion. These Easter biscuits can be left as they are, but often take on Easter themed shapes or decorations. 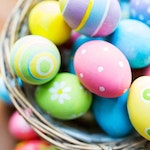 Perhaps the most popular food associated with Easter, boiled eggs are commonly more of a decorative feature, but it is customary to have a hard (or if you prefer it soft) boiled egg for breakfast on the Easter weekend.

A long-standing symbol of fertility and new life, eggs represent the tomb in which Jesus was buried after his crucifixion. It was thought to be empty, but he was brought back to life - symbolised by the egg's ability to give life to chicks.

Over the years it has become tradition to paint emptied eggs as a fun Easter craft for kids, and hang them on trees for decoration. Eggs also take the centre of Easter traditions, such as the Easter egg hunt and the Easter egg roll - a popular American past-time. 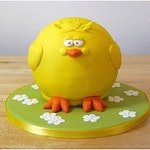 This tradition obviously developed from the prominence of eggs during the Easter season. Over the years the cute face of a baby chick has become a strong symbol of Easter and can be found on top of many a cake and cupcake.