Try rounding off dinner with some hot buttered rum. Sweet and spiced with cinnamon and nutmeg, it's a warming treat for cold evenings. Hot buttered rum originated in America in the colonial days. It is traditionally associated with the holiday season and is especially popular in autumn and winter. 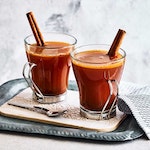 Combine the sugar, cinnamon and nutmeg in a small bowl, then gradually pour in the rum and melted butter, and stir together. Evenly divide the mixture between two small heatproof glasses. Top each with 100ml boiling water and stir well. Serve with a cinnamon stick to garnish.