People have been talking about rum becoming ‘the next big thing’ for a long time. There has been a large growth in the premium sector of rum and younger consumers are driving sales of flavoured and spiced rums. People are now willing to spend more on rum, looking for more interesting flavours and even buying super-premium rums to invest in. We take a closer look at the history of rum, share some fun facts and different rum cocktails for you to try.

The History of Rum

Rum is a liquor made by fermenting, then distilling sugarcane molasses or sugarcane juice. The distillate, a clear liquid, is usually aged in oak barrels. Most rums are produced in the Caribbean and North and South American countries.

Rum plays a part in the culture of most islands of the West Indies as well as the Maritime provinces and Newfoundland, in Canada. The beverage has famous associations with the Royal Navy (where it was mixed with water or beer to make grog) and piracy. Rum has also served as a popular medium of economic exchange, used to help fund enterprises such as slavery.

Rum's association with piracy began with English privateers' trading in valuable commodities. Some of the privateers became pirates and buccaneers, with a continuing fondness for rum; the association between the two was only strengthened by literary works such as Robert Louis Stevenson's Treasure Island.

The association of rum with the Royal Navy began in 1655, when a Royal Navy fleet captured the island of Jamaica. With the availability of domestically produced rum, the British changed the daily ration of liquor given to seamen from French brandy to rum.

Navy rum was originally a blend mixed from rums produced in the West Indies. It was initially supplied at a strength of 100 degrees (UK) proof, 57% alcohol by volume (ABV), as that was the only strength that could be tested (by the gunpowder test) before the invention of the hydrometer. The term "Navy strength" is used in modern Britain to specify spirits bottled at 57% ABV.

While the ration was originally given neat, or mixed with lime juice, the practise of watering down the rum began around 1740. To help minimize the effect of the alcohol on his sailors, Admiral Edward Vernon had the rum ration watered, producing a mixture that became known as grog. The Royal Navy continued to give its sailors a daily rum ration, known as a "tot", until the practise was abolished on 31 July 1970.

Today, a tot (totty) of rum is still issued on special occasions, using an order to "splice the mainbrace", which may only be given by the Queen, a member of the royal family or, on certain occasions, the admiralty board in the UK. Recently, such occasions have included royal marriages or birthdays, or special anniversaries.

A legend involving naval rum and Horatio Nelson says that following his victory and death at the Battle of Trafalgar, Nelson's body was preserved in a cask of rum to allow transportation back to England. Upon arrival, however, the cask was opened and found to be empty of rum. The [pickled] body was removed and, upon inspection, it was discovered that the sailors had drilled a hole in the bottom of the cask and drunk all the rum. The official record states merely that the body was placed in "refined spirits" and does not go into further detail.

When many of us think of rum we think of just one variety, but this couldn’t be further from the truth. In fact there are many different varieties such as light, gold, dark, navy, black and aged. If you fancy something light in flavour then opt for white rum, but if you want something really rich then black rum has you covered.

3. Mount Gay is a veteran

The oldest surviving deed for Mount Gay rum is from 1703, which makes it officially the oldest existing brand of rum in the world.

4. Has been used as currency

During the 18th century it was common for sailors to receive rum as part of their benefits package. Not too shabby.

For a more hands on rum experience Bacardi has you covered with their rum distillery in San Juan, Puerto Rico. Known as the ‘cathedral of rum’ this distillery produces over 100,000 litres of rum every 24 hours.

Prior to 1970 the Royal Navy actually gave out a ration of rum because it was believed to fight off the dreaded scurvy. The rum ration known as the tot was a daily amount of rum allocated to sailors on Royal Navy ships.

Rum manufacturers still remain tight lipped about exactly what goes into their unique recipe blend to achieve their specific tastes. Even today Bacardi rum is still produced by the Bacardi family, and the secret family recipe has been handed down from Don Facundo Bacardi Masso, through his children, grandchildren to the current masters of rum.

Aside from being delicious, rum also has some supposed magic properties, and in the 1800s it was used by many to clean their hair, in the belief that it would result in thicker hair. Even today some people still think that this magical spirit still helps to prevent hair loss. 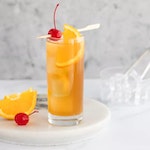 Method:
Pour the rums, juices, and syrup into a cocktail shaker, and fill with ice.
Shake well. Strain into a tall glass filled with fresh ice. Garnish with an orange slice and cherry skewer. Serve and enjoy. 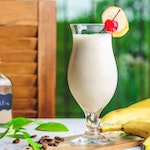 Put the ice in a blender. Add the white rum, Kahlúa, banana-flavoured liqueur, light cream, whole milk, and ripe banana and cover. Blend until smooth, increasing the speed as necessary to thoroughly pulverize the ice. Pour the drink into a chilled small hurricane glass, martini glass, or other cocktail glass. Put a slit halfway through a banana wheel and hang it on the rim of the glass. Top with a maraschino cherry if desired.