Whately Hall has a friendly ghost called Father Bernard and many hidden staircases behind its walls.

Seventeenth-century Whately Hall has the usual charm and historic touches you would expect from a building or its age, but it’s also got hidden staircases (found behind a cupboard door during a renovation in 1965) and priest holes (in room 52, also known as known as the ‘Fathers Dyneing Room’ in case you wanted to check it out in person). Another hidden staircase is said to lead from that hole into the room below (Room 20). The priest (it was usually priests using priest holes) could then flee out by means of the Harness Room or go further down into the cellars where they could access a maze of tunnels under the streets of Banbury itself. 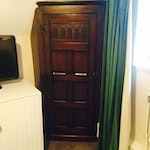 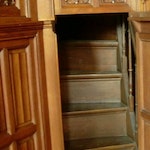 If hidden staircases and priest holes weren’t enough, Whately Hall has a GHOST too! Yes, the ghost of Father Bernard. He may or may not have died falling down one of these hidden staircases – it’s hard to say for sure since records are a bit vague. In any case, the manner of his death doesn’t seem to have gotten Father B down at all. Sure, having a ghost pop out at you is no doubt a shock, but Father Bernard is not supposed to be especially scary. He is said to hum, chuckle and smile as he moves briskly about the place, usually on the stairs or in the garden.

Thanks to The Banburian for this article.